As sound waves leave one medium and enter another, such as an air borne wave in a room reaching a brick wall, the wave will undergo certain characteristics.   A portion of the wave will attempt to pass through the medium, while the balance of the wave will reflect back off the wall.   Sound Wave Reflection occurs with that portion of the energy that stays contained to within the room.   Sound Transmission occurs with that portion of the energy that is able to transmit through the wall.   In either case, the sound wave is transferred as energy from molecule to molecule through either medium.

If you have ever stood in a canyon and shouted out your name, you would shortly thereafter hear the distinct repetition of your name echoing off the canyon wall.   Due to the speed of sound, if you were more than 56′ away from the wall, you would hear two different and distinct sounds separate by more than .1 seconds.    This would be called echo.   If you were standing 55′ or closer to the canyon wall, you would hear one prolonged sound known as reverberation.   The following animation illustrates our point. 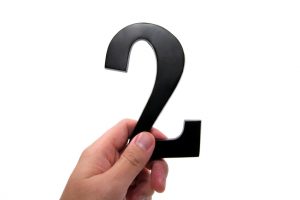 If the surrounding walls and ceiling in an untreated room are made of metal or brick, the RT value will move closer to 8-10 seconds.   If the surrounding surfaces are drywall or carpet, the RT value will move closer to 4-6 seconds. In either case, the problem defined is that human ear can tolerate only 1.5 to 2.0 seconds worth of reverberation before original sound and reflected sound become blurred.  This blurring is called background noise, and is defined as RT values that carry for longer than 2.0 seconds in a room. Our course on Sound Absorption here at the Academy will teach you how to control the RT values in your room by capturing and converting unwanted sound reflections, cleaning out your background noise, and dropping your RT values down under 2.0 seconds.    This is the threshold level of reverberation to human ear, and the target goal for our soundproofing treatments.

Along with the length of the RT value in your room, remember that sound waves also radiate out like a pebble wave in a pond traveling along at 770 mph.   In a room defined by four walls, a ceiling and a floor, these waves will touch all of these surfaces near simultaneous, triggering reflections that will quickly turn to background noise if left untreated.    The following animation illustrates the ripple effect from sound wave reflections carrying in a room stemming from a single sound source.

Angle of Reflection = Angle of Incidence

As you can see in the above animation, sound waves will reflect off the flat surfaces in a room in such a way that the angle at which they approach the surface will equal the angle they reflect back off the surface.   In a square or rectangular shaped room with three sets of parallel surfaces, this will deliver standing waves that repeat the paths they travel upon throughout the room.    This creates acoustic imbalance with unwanted “live” and “dead” spots in the room.    In a room filled with non-parallel surfaces, the standing waves are broken apart, which in turn will deliver more acoustic balance to the room.   Here at the Academy, our course on Diffusion will teach you how to scatter the direction of a sound wave and deliver more acoustic balance when needed in a room filled with 3 sets of parallel surfaces.

To recap, sound reflection is that portion of the original sound wave that will stay contained to within your room.   If the reflection is separated from the original sound signal by less than .1 seconds, human ear will hear the sound as one prolonged signal known as reverberation.    The longer the Reverberation Time (RT) carries in a room, the more background noise that will be generated in the room.    If left untreated, the background noise will compete with original sound and cause interference.   The strength of your sound reflection will vary depending on the frequency of your sound source, the surface textures in your room, and the configuration of your walls.   To learn how to control sound reflections and clean out your background noise, visit our course on Absorption here at the Academy, or turn to our Applications Guide to site your specific treatment.

As a sound wave travels across a room and touches a wall, a reflective wave is produced that will reintroduce a portion of that wave back into the room.   The balance of the original sound will attempt to pass through the wall to the adjoining room.   The energy that survives this transfer is called Sound Transmission.    The energy that is returned to the original medium is called Sound Reflection.

To understand the science behind sound transmission and sound behavior, we must first start with the basic understanding of a medium.   A medium is any form of matter made up of molecular structure.    This could be the air you breathe, the water in a swimming pool, the concrete floor of a factory, or the wood studs inside your walls.   Molecules are tiny invisible cells that make up all the matter of our world.

The boundary behavior in the animation below reminds us that sound waves are actually energy transfers from cell to cell within these mediums as we discuss in more detail in our course on the Sound Wave.   The molecules that comprise these medium will accept the vibrations induced by a sound source, and pass the energy on to its neighboring molecules, much like doing the “wave” at a sporting event.   Knowing that molecules make up wood, metal, concrete, glass, and water as well as air, this helps explain how sound is able to travel through structure as easily as it can through air.

The majority of our clients are interested in containing noise to within a room and combating the transmission of sound through a common surface.   To understand the treatment process, we revisit a favorite childhood activity of playing telephone.   Recall as a child when you could pull a string tight between two coffee cans and communicate back and forth with your friend.   Your voice would structurally carry through the vibrations of the string, which we now know was actually energy cell transfer through the molecules of that string.

Today when sound energy attempts to pass from room to room through a common wall, the same phenomenon is occurring as with the string example.    Any common contact point shared between two rooms serves the same purpose as the string.   The studs inside a common wall and the joists inside a common floor/ceiling assembly are pulling noise back and forth structurally before delivering air borne sound to the other side.    Note that all wall, ceiling and floor assembly systems carry a corresponding value that helps measure their ability to combat sound transmission.    This value is called the Sound Transmission Coefficient and is covered in its own STC course here at the Academy.

While many contractors think to stuff wall and ceiling cavities full of fiberglass batting in hopes of blocking noise and improving the STC value of the surface assembly, this procedure ignores the principles of sound transmission.   The common surfaces need to be lined with density and structurally disconnected in order to force the sound wave to collapse.   These sound barrier techniques are outlined in our Transmission Loss course here at the Academy, as well as the Walls link to the left.

Finally, as we teach in our course on the Hertz, the frequency pitch of a sound source will also determine the success of any noise transmitting through a common surface.    Lower pitched sounds carry longer, flatter sound waves that won’t have to travel as long in distance or time through a common surface.   Higher pitched sounds will travel with more north to south amplitude, forcing more distance and time through the same surface.    As the following illustration shows, this helps explain why drums and bass guitars are better able to transmit through a surface than televisions and telephones. 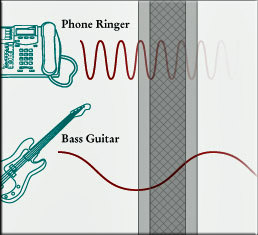 To recap, sound waves are not ocean-like waves that come crashing through a common wall, ceiling or floor surface.   Sound transmission is energy transfer between the molecules that comprise all the matter in our world.   Because sound travels through the vibrations of these cells, all common contact points between two rooms become conduits for noise, and the target for our transmission loss treatments.   While the noise we hear is all air borne sound, remember that the path that the sound wave first traveled could have been structure borne.   As we teach in our course on Transmission Loss, this structure borne energy requires a combination of “density + disconnection” as a sound isolation treatment to trigger its collapse.