Let’s start with a basic understanding of the sound wave.   Every sound we hear is the result of a sound source that has induced a vibration.   From a dog’s bark to a referee’s whistle, from a baby’s cry to a rock concert, the sound we hear is caused by vibrations that create fluctuations in the atmosphere much like a tuning fork will produce.   These fluctuations are called sound waves.   As our first illustration shows, these invisible waves pass over distance and time cycling above and below the atmospheric pressure line. 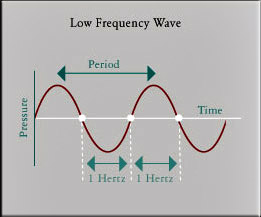 But in fact, sound waves really aren’t waves at all.  Sound waves are actually organized vibrations that pass from molecule to molecule through most any medium.   Air, steel, concrete, wood, water, and metal are all made of molecular structure.    As a sound vibration is produced, the fluctuations are passed through any of these mediums transferring energy from one particle of the medium to its neighboring particles, much like doing a “wave” at a sporting event.

A good example of this energy transfer can be tested on a billiards table.   A tightly racked set of billiards balls will mirror sound wave activity when the cue ball strikes the front ball in the rack.   The energy will transfer from ball to ball via structure borne vibration.   In a perfect rack, the center 8 ball should not move as the perimeter balls scatter across the table.    Sound waves are energy transfers through molecules in the same manner as billiards balls collect and transfer stored energy. 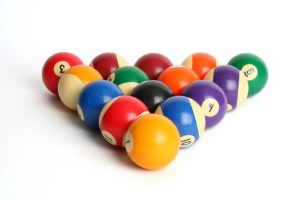 Now let’s place a barrier in front of the sound source.   When the air borne sound waves change mediums, the sound wave will undergo certain characteristics.   A portion of the energy will attempt to pass through the new medium, while the balance of the energy will reflect back off and away.   These define both the characteristics of Sound Transmission and the elements of Sound Reflection which are both featured in their own courses here at the NetWell Academy.

When air borne sound waves make contact with our ear, the eardrum will vibrate at the same resonance as the wave.   Our eardrum is the equal to the last billiards ball in line.   Tiny bones then stimulate nerves sent to our brain that deliver the energy we recognize as sound.    While some sounds are pleasant and soothing to our brain, other sounds are unwanted.   This is called noise.    Noise can be defined in several ways:

>  The sound intensity is too strong….
>  There are too many sounds at the same time……
>  The sound reflections are too prolonged in the room and compete with new original sounds

Sound wave behavior actually radiates outward from its source like a pebble wave in a pond, traveling along at an average speed of 770 mph.   This is the equivalent to covering 3.5 football fields in 1 second.   As the sound source produces its vibration, the energy transfer begins to reflect off all six surfaces in a room faster than we can blink, and begin returning back into the room.   Human ear will detect the blur of both the original sound and the reflecting sound.  When the reflections become too strong or carry too long in the room, this creates what is called background noise.   The soundproofing treatments we outline in our Absorption course here at the Academy will teach you how to clean out this unwanted background noise and deliver better acoustics back to your room.

Finally, let’s address two terms often used in the sound control industry:   Decibels and Hertz.   The “loudness” of a sound wave is measured in intensity by Decibels (dB),  while the “pitch” of the sound wave is measured in frequency by Hertz (Hz).    As we teach in our course here at the Academy, a Hertz is equal to one sound wave cycle per second as is illustrated at the top of this page.   The Hertz will not decay over time or distance, but the Decibel level will.    In our course on the Decibel, we learn that as a sound wave travels over distance and time, the intensity of the wave will decrease.   The Inverse Square Law teaches us that as our distance from sound source to receiver is doubled, the perceived sound will deteriorate by 75%. 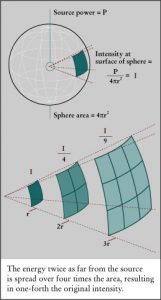 To recap how sound waves work, remember that sound waves are actually energy transfers from molecule to molecule that can travel through any medium, not just air.   If the medium is more dense, the sound energy will travel more quickly because the molecules are packed tighter.   If the medium has no molecular structure, there is no transfer and therefore the absence of sound.    This helps explain why, despite what you see in the movies, there is total silence in outer space where no molecules exist.   It also explains why sound travels four times faster through water than air, eleven times faster through steel than air, and nineteen times faster through drywall than air.