Walls that bleed noise are typically not heavy enough to withstand resonance, and structurally not disconnected enough to force the collapse of the trasnmitting sound wave.   Think of a string pulled tightly between two cans, with your voice carrying through the vibration of the string.   Well, the studs inside your wall cavity are connecting your two rooms together, and delivering the same net effect.   The leakage is more about the structural connection points than the dead air space between the studs.  Stuffing batting insulation between those studs is therefore a futile exercise, as it is ignoring the essential path that the noise is taking to transmit through…it is structure born vibrations that are the hidden culprit. 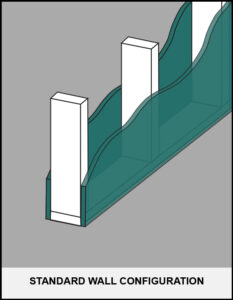 To properly insulate a wall against sound bleed, two components need to be added to the wall, whether it is a new build, remodel, exposed frame or finished surface as your starting point.   In any of these cases, your goal is to force disconnection in your wall assembly.   This will force the vibrating sound wave to collapse inside your wall, rather than transmit through.   Furring strips, resilient channels or hat channels can be applied to an existing finished surface and drywalled over. 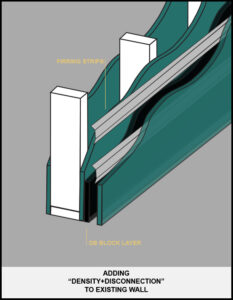 For new builds, or tear out remodel applications, there are framing techniques that allow for the separation of the two adjoining rooms, without the need for adding resilient channels to your wall assembly.   Building a double wall, or a staggered stud wall assembly, will produce the disconnection you will need to help isolate two adjoining spaces and force the collapse of the structure borne transmitting sound wave. 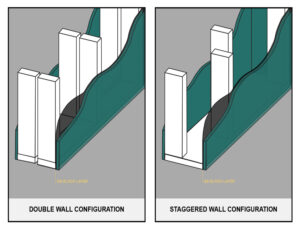 The second ingredient required in a sound isolated wall is density.   Think of a tuning fork, a drum, a guitar string or a wine glass.   So long as these objects are allowed to vibrate, they will produce sound, right?  But touch any of them with the palm of your hand, and the sound dies instantly.   Mass kills vibration.   The same treatment should be applied to a common wall or ceiling surface to deaden the surfaces ability to accept vibrations.   In the today’s marketplace, the most popular technique is to layer a mass loaded vinyl called dB-Bloc on to your surface.   This is a thin dense membrane that will deaden vibrations. 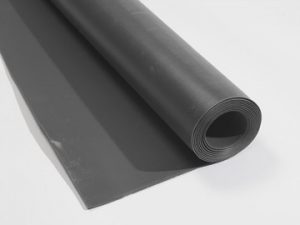 So the technique for soundproofing your common wall is to combine these two components.   Add the density of  dB-Bloc to your walls, then a furring strip system, then new drywall, and you’ve got a nice STC value.  Each treatment will trigger varying results based on leakage and decay, ventilation systems, outlet plates, plumbing fixtures, floors, ceilings and more, but to combat the bulk of the noise bleeding structurally straight through your walls, go with dB-Bloc.   The rolls are shipped  in 54″ x 30′ rolls right here at NetWell Noise Control.   Good luck!

For help with a common wall sound issue, or any other acoustic project, call the help desk at NetWell Noise Control for free consultation.   1-800-638-9355.   Or visit us online at our wall soundproofing page or reach our help desk at www.controlnoise.com.

Our popular Room Analysis is complimentary. This innovative tool is designed to define the framework for your acoustical treatment and quote your project.

The key to the success of your soundproofing treatment lies with getting the coverage amounts right. Our goal is to safe guard against under treating your space, and conceding sound values back. Please submit the information below.  We will report back with the results of your Room Analysis, and quote your project.  Questions first?  Call 1-800-638-9355.